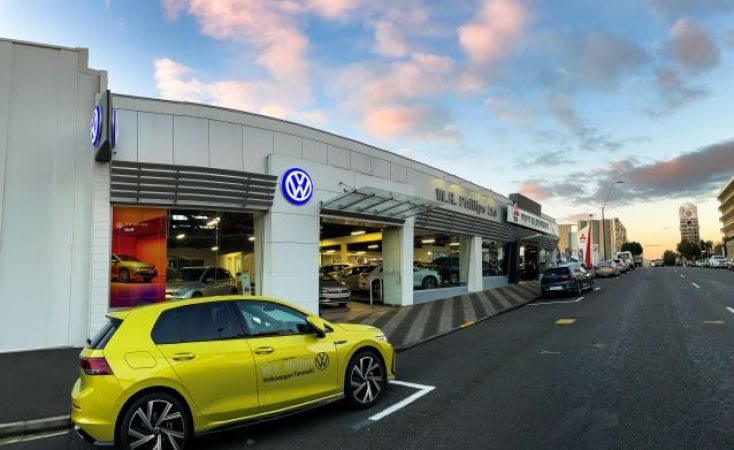 “We are thrilled they have come on board and it’s a perfect fit because this is a self-drive festival. However, tour groups come too,” she says. “To get a sponsor like W.R. Phillips just shows how great the community support is for this festival.”

The Festival Hub has also shifted to the 20-year-old Volkswagen dealership at 156 Devon St West.

“People can come to buy their tickets and be able to talk to our dedicated festival gurus to create an itinerary to drive around the mountain,” Tetsu says.

At the new location, there will also be more room to spread out, coffee and toilets available, plus a bunch of prizes, including a $500 valet pack from the family-owned car dealership.

Tetsu says the Volkswagen brand values align strongly with those of the Taranaki Garden Festival, which is all about creativity, the outdoors, connections and adventures.

Those ideals are embodied by their latest campaign with ambassador Jason Woodside, an internationally renowned graffiti artist who has worked alongside Banksy.

“He has been travelling around New Zealand taking landscape photos with Volkswagen vehicles, which I see as a celebration of both,” Tetsu says.

Visitors to the Festival Hub will be able to take part in a silent auction for a piece of his work, which will be on display.

“It’s huge to get an international brand to support the Taranaki Garden Festival,” Tetsu says.

During the October 29 to November 7 spring event, people will be able to see a Volkswagen T-Cross driving around Taranaki adorned with the garden festival’s 2021 brand.

Julia Phillips, who manages the Volkswagen dealership, says early this year, second-generation co- owner Neil Phillips and wife Lynne wanted to give money to the community in recognition of the company’s 75-year anniversary.

Lynne, Neil and Julia all have a passion for gardening, so believed the annual spring festival would be a great fit.

“Our customer base has the same values,” Julia says.

“They are fun, fashionable, environmentally friendly and sustainable. We have electric vehicles and we’re writing a sustainability programme for W.R. Phillips.”

The Volkswagen is an adventure vehicle synonymous with road trips, which is exactly what garden festival visitors are all about.

Julia’s aim is to make the Festival Hub “an inviting space with seating amongst indoor plants”.

“There’s a special treat every day for the first 20 people who register with the Festival Hub.”

For Julia, a big reason she supports the gold sponsorship is the chance to work with the creative team at TAFT, which runs the festival. “We are so excited – it’s such a blooming cool thing,” she says.

Arts matter, now more than ever!

Artist Expressions of Interest for 2022 are now open!

August 13, 2021
PrevOlder PostsTaranaki Arts Festival Trust documentary looks back on 30 years of festivals
Newer PostsAward-winning play “that all New Zealanders need to see” to tour the countryNext
view all news