PrevOlder PostsWomad 2022 likely to be all Kiwi lineup
Newer PostsThe 34th Taranaki Garden Festival has a new driving force and a fresh home for the Festival Hub.Next 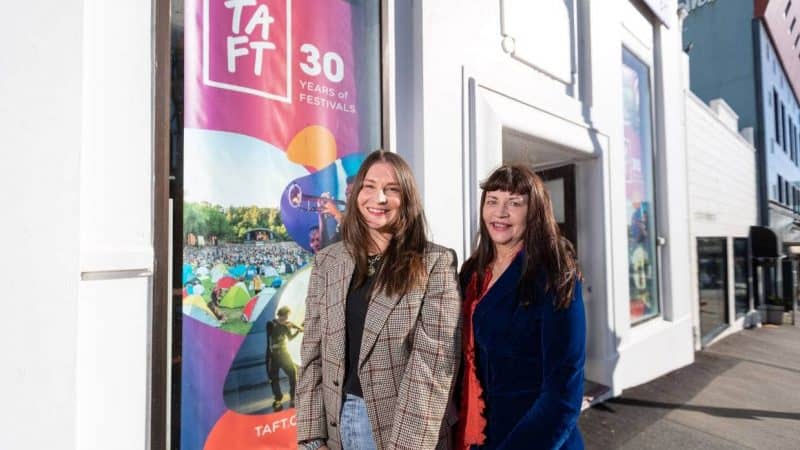 And if it wasn’t for Covid-19, the Taranaki Arts Festival Trust (Taft) probably wouldn’t have had time to properly commemorate the achievement.

“We lost the rights to present Womad at the end of last year and the silver lining is it gave us a couple of months to recalibrate as a team and this project came out of it,” Taft’s marketing and communications manager Rebecca Johnson said.

That project is a documentary film on the history of Taft, which has involved interviewing more than 50 people, from former board members to fans of its work.

“Every other festival year we are so busy presenting festivals, and we go from one to another,” Johnson said.

“Having this time has allowed us to go through archives and speak to people about our history.”

The stories they uncovered throughout the interviewing process had been special for the Taft team.

“What goes on behind the scenes of festival life – people wouldn’t even believe some of the things we get up to,” she said.

“Like crawling under a Spiegeltent to light the gas. That was a career highlight,” Taft chief executive Suzanne Porter added.

It was started by Grant Kerr and Roger King, who had seen the Wellington International Arts Festival and decided there was an appetite for smething similar in Taranaki.

Since then, the trust has put on 19 arts festivals with more than 60 shows for the Taranaki community, with Womad coming on in 2003, and the same year Taft took over the running of the Taranaki Garden Festival.

Taft was the second arts festival organisation to be established in New Zealand, and is therefore one of the oldest in the country.

It has been successful because of its multi-faceted approach to arts, as well as community support and 30-year-long partnerships.

“Taft put Taranaki in a position where arts became accessible to everybody,” Johnson said.

But ultimately Taft’s confidence has been its biggest win.

“Taft has never been shy of being bold or trying something different,” Johnson added.

But it didn’t come without difficult times.

“We’ve definitely had our ups and downs,” Porter said.

The documentary trailer will be released on July 28, and the trust is still in talks about when it will screen to the public.

Meanwhile, during the Right Royal Cabaret Fest, which runs from July 29 to August 1, Taft will be exhibiting more than 60 images of past festivals in the Alexandra Room at the TSB Showplace.

“Hopefully it gets people excited for what the next 30 years of Taft is going to be like,” Johnson said.

WOMAD has been in Taranaki for 20 years and this guy has been to them all!

A thank you from Taranaki Arts Festival Director Megan Brown

July 10, 2022
PrevOlder PostsWomad 2022 likely to be all Kiwi lineup
Newer PostsThe 34th Taranaki Garden Festival has a new driving force and a fresh home for the Festival Hub.Next
view all news