PrevOlder PostsWelcome back WOMAD NZ!
Newer PostsThe stories of Taranaki ready to be shared with the rest of New Zealand and the worldNext

A weekend of words, circus and cabaret set to turn up the heat in Taranaki! 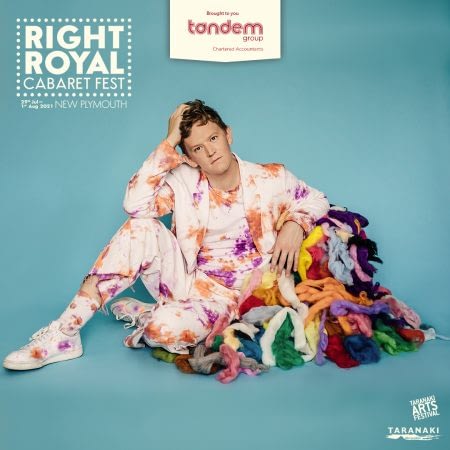 With nearly 40 events spread across four days and nights, New Plymouth will generate a buzz around Taranaki and further afield this winter as the region lives up to its reputation as a festival province like no other between 29 July and 1 August.

Taranaki is well known for its festivals. Womad, the Taranaki Garden Festival, and the hugely successful Taranaki Arts Festival annually bring together people and performances from around the world. These world-class events, matched with galleries, museums, and a unique culinary and hospitality scene, have shaped the region’s identity and put New Plymouth on the map.

“Festival of Words and Right Royal Cabaret Fest is a great opportunity for us to jointly deliver programmes that recognise Taranaki’s role in the proliferation of literature, arts and cultural events within Aotearoa,” Hosler says.

“We are delighted with the calibre of authors, poets and illustrators we’ve been able to attract to the festival. The feedback we have already received has been extremely positive.”

The Festival of Words starts with a special evening with award-winning writer Witi Ihimaera on Thursday, the 29th of July, at Puke Ariki Museum.

Ihimaera’s writing career started nearly 50 years ago when the first collection of short stories by a Māori writer was published, leading to a bibliography of more than 40 titles, including The Whale Rider and his two-volume biographyMāori Boy and Native Son.

He will be joined at Puke Ariki by sound artist Kingsley Spargo for an evening of melodies and spoken word.

The Right Royal Cabaret Fest is the unofficial kick-off celebration marking the charitable trust’s 30th Anniversary of presenting festivals in Taranaki. Some of TAFT’s former artists, festival teams, and supporters are expected to join in the festivities.

“TAFT has survived and thrived here in the region for 30 years. The creative foresight of founders Roger King and Grant Kerr helped instill a healthy cultural appetite for our people,” Suzanne Porter TAFT CE says.

“We are certainly looking forward to showing everyone that arts do thrive here in Taranaki, even more than ever while celebrating our history, the festival and the calibre of New Zealand artists.”

While borders have impacted bringing artists into the renowned arts festivals since 2020, RRCF will have an international flair. Modern-day chanteuse Mandy Meadows returns to New Zealand after selling out every “Piaf: The Legend” show in 2018 from Verdi, Royal Albert Hall, and the Spiegeltent in Edinburgh.

For those looking for more laugh out loud shows, insta-famous, award-winning comedian Chris Parker brings his quirky comedy and infamous DAISO Japan felting kit to town for How I Felt. After leaving crowds at the recent NZ Comedy Festival in stitches, How I Felt is possibly New Zealand’s, and dare we say it, the world’s very first live comedy felting show.

Another familiar face on the comedy circuit or more famously known as Snapchat guy, comedian, impersonator, and author Tom Sainsbury will be at Puke Ariki Museum on Saturday, 31 July, to chat about his new book. New Zealanders: The Field Guide is a compilation of Sainsbury’s favourite kiwi archetypes, which he believes all habitual people-watchers will know and recognise.

The biggest show of the festival’s programmes is Haus of YOLO, by The Dust Palace, which is premiering for the first time at an arts festival. This exhilarating, visually stunning cabaret circus experiment, featuring splashes of fashion and a great party soundtrack, is a stage spectacular not to miss.

Porter is excited to see the show come to life on the stage of the Theatre Royal, “HAUS of Yolo is our WOW factor show. The team saw this at this SPLORE festival in March, and it was unanimous. We all knew it would be a great fit for the cabaret fest.”

Both festivals are taking workshops and performances out to the regional areas.

“We want Festival of Words to be accessible to as many people as possible and be a reminder that NPDC’s libraries are all about connecting with our community and the opportunities that come from discovering the world of words,” Hosler says.

TAFT will take performances out to school as part of the Schools Programme. With the support of the TOI Foundation, Tranzit, and NPDC, Right Royal Cabaret Fest offers students throughout Taranaki the opportunity to experience an exciting new show from circus theatre company The Dust Palace.

“We’ve always believed we have a responsibility to give as many school children as we can access to performing arts. Exposure to arts and culture has many positive effects on the community’s wellbeing and the future of our next generation,” Porter says.

“And over the last 30 years, our Schools Programme has given thousands of school children the opportunity to experience the arts who may not otherwise be able to.”

This year ticket purchases are encouraged to PAY IT FORWARD, KEEP ARTS THRIVING, an initiative that’s been popular globally across arts organisations. TAFT encourages everyone to make a $5 ticket donation at the end of their checkout on the website.

“We are delighted to be a part of the Right Royal Cabaret Fest and to support the very hardworking people who deliver these events. These events are reigniting the vibrancy of our community after a year or so of lockdowns, postponements and cancellations.”

Right Royal Cabaret Fest and Festival of Words tickets are on sale now.

May 28, 2021
PrevOlder PostsWelcome back WOMAD NZ!
Newer PostsThe stories of Taranaki ready to be shared with the rest of New Zealand and the worldNext
view all news